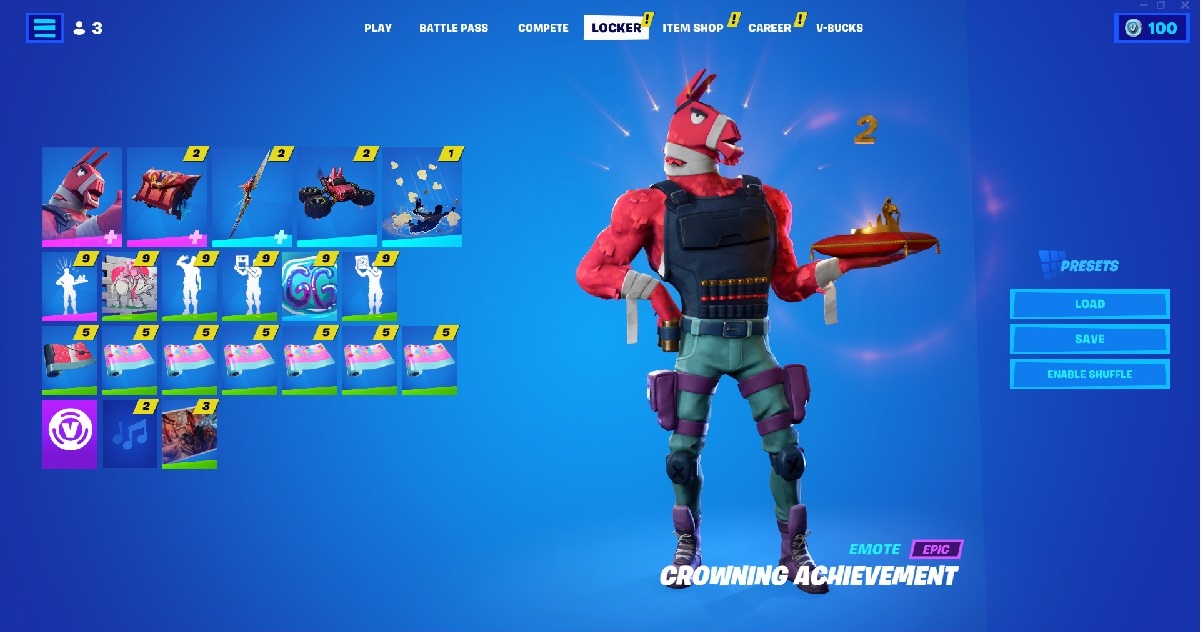 Even since my Ph.D. studies in adult learning geared towards games, both games and learning have fascinated me. Meanwhile, I work with learning in the workplace and the difference between those two worlds can have any grown-up cry. The first world can be utterly removed from the real world of work, individual, very boring, and with a constant panic around upskilling and reskilling. The second world is highly immersive, gradually harder, social, and lots of fun. This is the story of how I learned to play Fortnite – a game of ‘last man standing’ for individuals and teams with a storm that kills, lots of weapons and ammo, and berries, and purple birds and dinosaurs. And swearing and laughing as 100 people on the island get fewer and fewer in a smaller place.

I started playing Fortnite a couple of months ago, to see what the fuzz is about. My oldest (now 12) has played it a few years and I first associated it with a lot of screaming and cursing. Then the playing and the players matured and now they mostly engage vividly with just the occasional cursing. I decided to learn to play Fortnite, after soon 20 years with World of Warcraft (WoW) and these are the main ways I used to get into the game:

After playing for some time, playing with others (step 2 above) totally dominates my learning. The 10–14-year-olds know all the tactics, weapons, ways in and out, enemy movement and skills, and build craft, so I just need to be in it and soak it up and practice it.

One of the best books on learning and games is James Paul Gees’ “What Video Games Have to Teach Us About Learning and Literacy” and at the end, he lists 36 learning principles (here with my comments). We can easily see that many of these still apply, such as:

Active, Critical Learning Principle: All aspects of the learning environment are set up to encourage active and critical, not passive learning.
–> You learn to play Fortnite by being active (see point 1 above). Just get in there. If you are passive, you will be an easy target and die. And by being active, you learn.

Semiotic Principle: Learning about and coming to appreciate interrelations within and across multiple sign systems (images, words, actions, symbols, artifacts) as a complex system is a core to the learning experience.
–> This is true for any game where, in the beginning, you don’t know what for example epic, one-shot, or double movement are. You learn as you go. Such as in WoW: Try being in a party and pick up something that is BOP and that another player needs more than you, and the social setting will teach you a thing or two.

Multiple Routes Principle: There are multiple ways to make progress or move ahead. This allows learners to make choices, rely on their own strengths and styles of learning and problem solving, while also exploring alternative styles.
–> There are many ways to be the best of 100 people in Fortnite. I thought I had come up with something great when I landed on the outskirts and slowly moved towards the center. I could collect weapons, not meet as many, and be in more control. Until I heard from the 10–14-year-olds that this is how the noobs play, of course. Experienced players land in the most crowded city since the fighting is fierce (and resembles end fights more), the weapons are plenty, and you do less running from the storm. Two very different ways that work but based on different mindsets.

Transfer Principle: Learners are given ample opportunity to practice, and support, transferring what they have learned earlier to later problems, including problems that require adapting and transforming that earlier learning.
–> This happens all the time between matches in Fortnite, or after respawns in WoW. In one game you learn that attacking a heavily armed guard just for the hell of it is fun for a very short time if you have a pickaxe. In the next game, you find a way around him (so-called ‘reskilling’).

Achievement principle: For learners of all levels of skill there are intrinsic rewards from the beginning, customized to each learner’s level, effort, and growing mastery and signaling the learner’s ongoing achievements.
–> You are always challenged at the right level in Fortnite and when you are rewarded it looks just awesome (see top image). A.k.a. ‘upskilling’.

It can be easy to say that gaming is one thing and corporate learning another. But remember that this is how our kids grow up now and how the gaming world has worked the last 20 years. Meanwhile, what has happened to corporate learning? We still talk about gamification, learning management systems, mandatory training, testing via multiple-choice, social learning as if this is something new, and pushing heavy content as if it should land in people’s brains, instead of challenging them.

Trust me, mastering Fortnite and WoW is really hard. So, let’s wait for the kids to show the way. They never took a course in Fortnite but are masters of it. And have fun doing so.