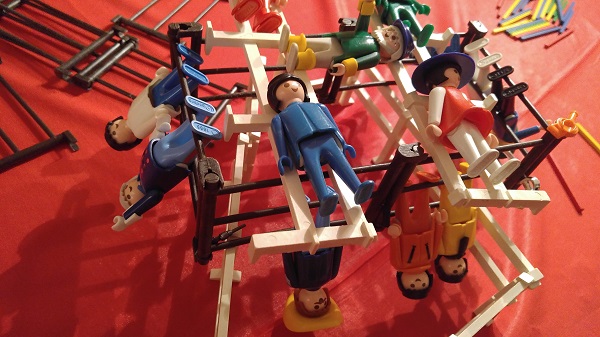 The last six months I have made it a habit to read and listen to the books and podcasts from Tim Ferriss and James Altucher, and then apply some of their ideas. For example, Tim’s book “Tools of Titans” contains a tremendous number of tricks and tips to live smarter, while James’ books in the Choose Yourself series helps you build a stronger foundation for everything in life.

Meanwhile, via Lee Bryant and PostShift, I have been introduced to the Quantified Organization relating to the Quantified Self.  Instead of guessing if we are making progress or not, we can measure if we are or not. On a personal level, it happens via apps, habits, smartwatches and more, and on an organizational level we use KPIs of all sorts.

It is, however, hard to measure if you are progressing in your personal development. Many of the tips coming from Tim’s and James’ podcasts and books feel great, but then I wonder if I can measure if I am progressing or not. Then it struck me that I might as well practice ‘idea sex’ as James puts it. By combining the advice from James and Tim with a theory like Constructive Developmental Theory, I might gain some clarity. This is a half-baked idea, but that’s ok: I learned from Harold Jarche that a great way to develop your own thinking is by releasing such ideas into the open. Then others can react, and we can continue building our collective knowledge.

I first heard about John Kegan’s Constructive Developmental Theory when reading about change, and especially why some people never want to change. Fast Company wrote about it when mentioning the mind-set we need to succeed in the future, and linked to Future Trends in Leadership Development (PDF) from the Center of Creative Leadership. Then Ana Cristina Campos Marques Curitiba clarified all of Robert Kegan’s five levels in her post on Constructive Developmental Theory:

No matter if such levels are true or not, they can work as mental models. I find that the ideas presented via Tim’s and James’ books and podcasts urge us to move up the above ladder. By adopting the best tips and tricks and habits, we can move from being loyal followers who don’t question anything, over to self-directed thinkers and then self-transforming minds. It is almost as if we in this later stage can hold ourselves in our hand and objectively analyze what is best for this person.

As Jay Barbuto puts it in this video, at this level we are no longer the prisoners of our own identity. Instead, we see all the different nuances and possibilities and can reinvent ourselves.

So there we have it: By merging great ideas from people like James and Tim and their guests with developmental theories, we can reinvent ourselves. A great start for a new way of life.